TIPS FOR CREATING AND MAINTAINING POTS 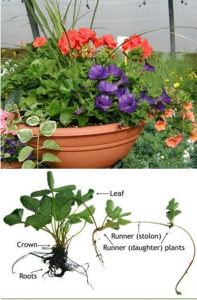 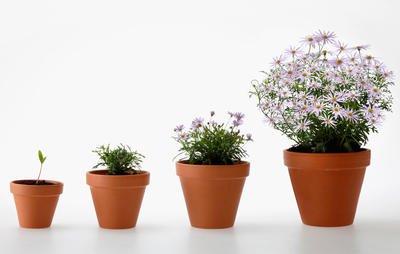 All plant containers should feature drainage holes on the bottom so excess moisture can drain from soil. You can drill holes in plastic pots lacking holes, but clay pots without holes require a liner pot that has drainage holes. Plant in the liner pot, and set it in the more decorative clay pot. Size is also an important consideration. If you are repotting a perennial plant,choose a container one size larger than the plant’s old pot. Plant an annual plant in a container large enough to support the plant once it reaches its full size so you don’t have to repot it multiple times during its single growing season.

The best kind of soil to use depends on the kind of plant. Most houseplants grow best in a standard potting soil while cacti and succulents require a quicker draining cactus soil mixture. Vegetables and annuals need a moist standard potting mix. Avoid potting soil consisting of sedge peat, pure compost or garden soil because those materials drain poorly. You can mix compost with potting soil to add organic matter to the potting soil, but don’t use only compost in a plant’s container. Combining equal amounts of sphagnum peat, perlite and compost creates a potting mix suitable for most plants.

The part of a plant where its stems emerge from its root system is called a crown. Most plants require potting with the crown sitting at or just above the top of the soil. Some have multiple crown when producing runners with daughter plantlets. Strawberries are an example of these.

thoroughly after potting so it can settle around the plant’s roots. When potting a plant, fill one-third of the pot with potting mix, also called soil. If the soil falls through the drainage holes, then line the pot with a coffee filter before adding soil. The filter holds in the soil while allowing water to drain. Set the plant in the pot, and then add or remove soil from beneath its root ball until the crown sits 1 or 2 inches beneath the pot’s rim. Add more soil around the roots, but don’t cover the crown. Water the soil

Plants may grow slowly or even wilt slightly immediately after planting because their roots must recover from handling and establish themselves in their new pot. Provide each plant the amount of daily sunlight necessary for its variety; shade it from intense afternoon sunlight for the first three or four days after potting, however, to avoid sunburned foliage. Water potted plants when the top 1 inch of their soil feels dry, and always empty the drained water from their drip trays after watering. Regular soluble-fertilizer applications can begin about two to four weeks after potting.